The site where the schools are built presents a facade to the Calle Mayor and Calle Ferial for the rear band. It treats of a plot of long and narrow proportion between medianeras.
The building is concentrated on the side of the main street and subdivided into three successive volumes separated by patios. The plot portion facing Calle Ferial is totally free of construction. 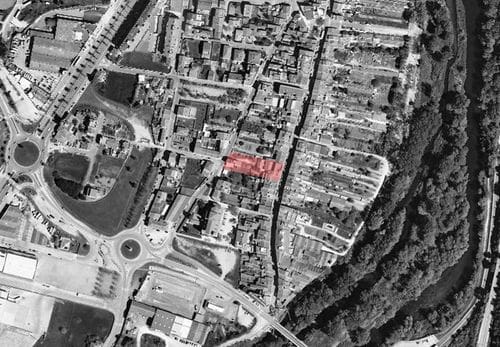 At the level of the repair intervention that is proposed, three main lines of action will be implemented:

-The taking of samples of the elements to intervene in the façade to be able to perform analytics and determine the composition and chromatism of the original materials.
-The cleaning of the entire facade surface with specialized products, consolidation of the stuccos and change of color according to the original by Rafael Masó.
-Intervention in the most representative decorative elements: ceramics and locksmith. Cleaning and consolidation of these.

As previously mentioned, during the diagnostic session the poor state of the main façade of the Sarrià de Ter Schools was noted. The project aims at measures for the conservation and elimination of pathologies taking into account the economic resources and the priority actions to be developed.