The Travessia de l’Auriga is one of the streets in the lower part of the Barri Vell (old city centre) in Girona, situated very close to the Plaça del Vi square. It is an urban area with very narrow and shaded streets, with tall buildings from the middle of the last century, most of which have a wooden structure and stone facades.

The construction of the building dates from 1835, and actually some of the present owners are members of the families that had always lived there. There have been several transformations and partial interior change, but the original volume and the exterior appearance remained pretty much unaltered.
In year 2000, the condominium of proprietors commissioned us a building pathologies evaluation, and a diagnosis to assess the feasibility of undertaking a restoration of the building. In 2007 a complete renovation was started, and involved three successive operations:

The elevation of a sloping tile roof over the current older rooftop terrace, which is adjacent to the Auriga street and Travessia de l’Auriga. The target of this tile roof is to recover the historical character of the original building, which was modified during the 1930s with the substitution of the wooden beam joints for the present flat rooftop with concrete beams.

The restoration of all three facades in several successive phases: Cleaning out the facings, brickwork, facade wall coatings and woodwork.

Installation of an elevator and the modernisation of the installations have been conducted. The elevator structure is essentially sheet metal. Its installation required some changes at ground floor level, such as dismantling the current stairway in the entrance hall. It is replaced with a new prefabricated metal one, with only one series of steps. 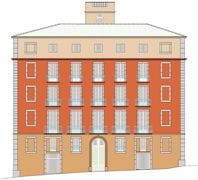 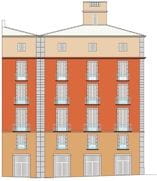 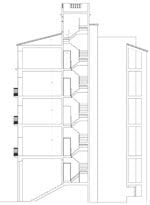